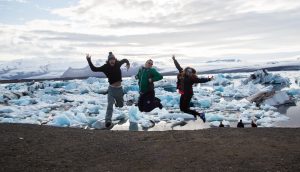 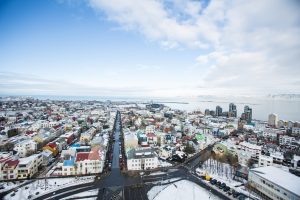 And you get to see things not visible during other season like frozen lakes and waterfalls, fields of snow and of course the Northern Lights – all if you are lucky as the nature is a tricky beast and none of the above can be planned in advance. 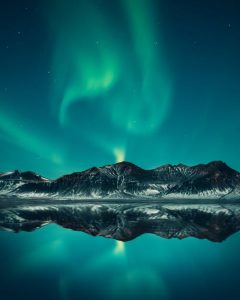 The Northern Lights, also called Aurora Borealis, and Norðurljós in Icelandic, are one of the most spectacular shows on this earth and can frequently be seen in Iceland from September through March on clear and crisp nights. The Northern Lights occur high above the surface of the earth where the atmosphere has become extremely thin, at an altitude of 100-250 km. They are created by electrically charged particles that make the thin air shine, not unlike a fluorescent light. Auroras can be seen in auroral belts that form 20-25 degrees around the geomagnetic poles, both the north and the south.
The name Northern Lights was first chronicled in the original Old Norse, as “norðrljós”, in 1230; while the name Aurora Borealis (“Dawn of the North”) is jointly credited to have first been used by Galileo Galilei and Petrus Gassendus in the 17th century. Derived from Aurora, the Roman goddess of Dawn, and Boreas, the Greek god of the North Wind, the name evokes some of the majestic, otherworldly splendour of an auroral display.
What causes this spectacular phenomenon, so characteristic of our northern skies here in Iceland? Well, it’s electricity that does it – and of course it all.
Here you can find the Northern Lights forecast 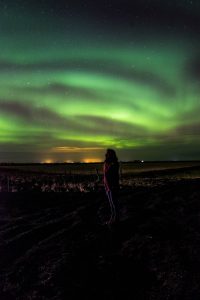 Iceland looks very different over the winter months and many visitors think it is even more adventurous during these cold and dark months and here are few picture that can give you an idea. 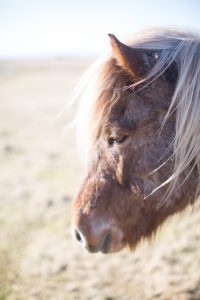 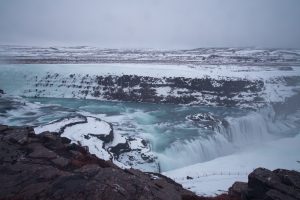 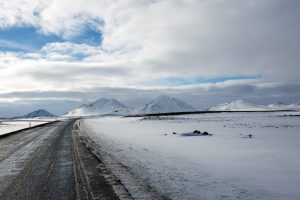 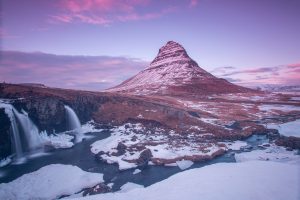 Being outside in a bathing suit in the middle of Icelandic winter is one of many visitors favorite experience.  not only are you warm in the cold (contradiction in term) but usually there are few people around that gives you an opportunity to relax and listen to the winter silence while exploring the sky above.

There are both natural hot pots and the public swimming pools to be found all around the country. 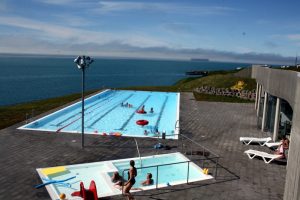 Here you can find location of the bath that fits you travel schedule.

Weather in Iceland during winter

Iceland can be cold, windy, cloudy, rainy/snowy, and very unpredictable during winter.  You may know the saying “The only thing constant is change” ?  Well is could have been written about the Icelandic winter weather so make sure to follow closely the forecast and do ask around,  for example at the nearest information center. 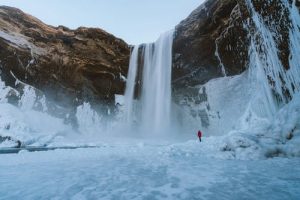 Driving past an upside-down waterfall during my last Iceland roadtrip

Driving in Iceland during winter can be a challenge but if you just take care and drive according to the road condition you should be fine.  The main roads are serviced all year round and at the most they are partially closed down for few hours if there is bad snow blizzard.  You can travel all around the country except for the highlands that is close due to snow until late June. 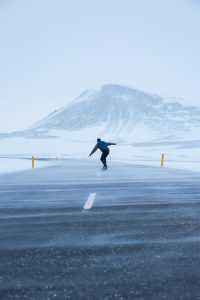 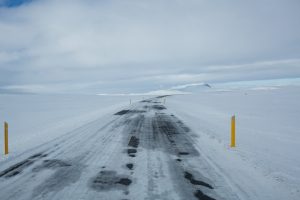 For checking the road conditions you can click here

Days are short in the Icelandic winter

Our shortest day (December 21st) is only about 4 hours long so we recommend you take the limited daylight into your planning efforts and make sure you can get to place of planned overnight stay before dark.  We do recommend that you have a flash light as part of your luggage, you might need it! 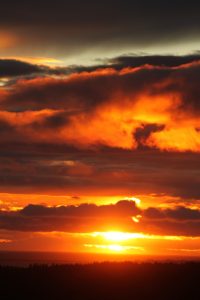 Even though there are many campsites in Iceland, most of them are only open over the summer months but many are open all year round.  Here on the map below you can find some of them.

New camping regulations took effect in November of 2015. Since then, it has become illegal to spend the night in a camper outside organized campsites, unless you get permission from the landowner. To be more specific:
“Camping with no more than three tents is allowed on uncultivated ground for a single night, unless the landowner has posted a notice to the contrary. However, campers should always use designated campsites where they do exist. Do not camp close to farms without permission. If a group of more than three tents is involved, these campers must seek permission from the landowner before setting up camp outside marked campsite areas.” 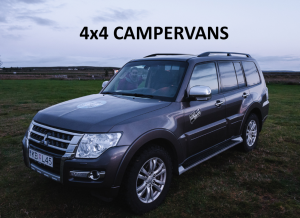