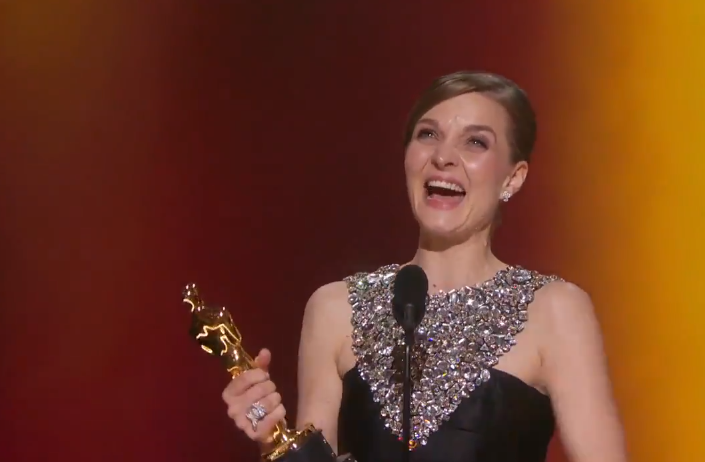 The first and only Icelander to win the Oscar 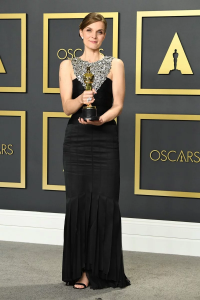 The Icelander Hildur Guðnadóttir from the town of Hafnarfjörður made history on February 9th 2020 by becoming the first Icelander to win an Oscar.  The composer and musician Hildur was awarded in the category of Best Original Score for the film Joker.  Iceland has been a proud leader in gender equality and the inhabitants are specially pleased with the fact that the first Icelander to win this world famous award is a woman.  In her thank you speech she gave this tone as well by ending with these encouraging words;  “To the girls, to the women, to the mothers, to the daughters who hear the music bubbling within: please, speak up. We need to hear your voices.”

The unbelievable success story of Hild­ur started by winning the Emmy awards for her music in the TV sercies Chernobyl in September 2019.  Then she won the Golden Globe for the music in Joker in January 2020 and fews days later she won the Grammy awards for Chernobyl.  Not stopping there she headed towards Europe and won the UK BAFTA awards for the music in Joker and then the Oscar for the same on February the 9th 2020.  Acoording to the press she is the eight person in history to reach all of these awards in such a short period. 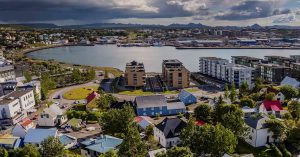 The town of Hafnarfjörður, the home town of Hildur, has produced many of Iceland’s most prominent musicians in the past years.  From the locally famous Björgvin Halldórsson who became perhaps the first Icelandic superstar in the early 70’s and is still going strong to the brothers Jón Jónsson and Friðrik Dór who have been popular for a decade and now the famous Auður who had the most popoular song in the country in 2019.   What is it that makes such a high number of good musicians,  is it the close relation to the lava, elfs and the ocean or is it the great work done in the local school of music?  Who can tell,  no one I guess.   But the most logical answer is most likely a combination of parenthood and all of the other things above.

Hafnarfjörður is an excellent town to visit as it has many nice small fishing town characteristics.  It is known to be the hometown of the Elfs and Vikings in Iceland. 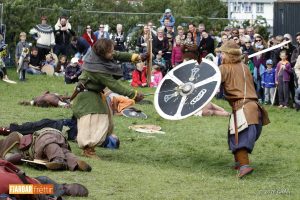 For more than two decades the annual Viking festival has been celebrated by “Vikings” from all over the world.  During this one week long festival you can see real Viking battles,  handmade Viking jewlery, artists carving in wood and blacksmiths operating the old fashioned way.  You might even encounter few fortune tellers and people with magical powers.  Of course this comes with the famous Viking feast of eating and drinking into the bright summer nights. 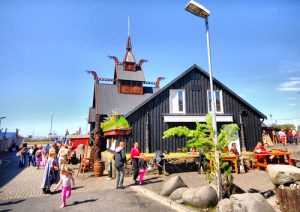 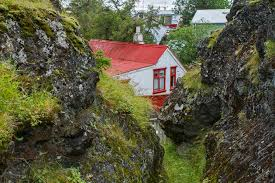 By many people the belief is that many mystical things can be found in the lava fields surrounding the town, one of these are the Elfs.  It is even believed that you will find the palace of the Elfs in the middle of the town, where you might see the white dressed elf queen !  If you think this is a joke then just visit the official service center of the city of Hafnarfjörður where you can get the Elf map for free and then walk around the most notorious elf spotting sights.

It is very nice to stroll along the harbor and into town feeling the total relaxation of the small town life and Hafnarfjörður town is only 15km distance from Reykjavik down town and easily accessible by bus.

If you are camping then there is a good campsite where you can put down your tent or park your campervan and just walk from there to one of the towns cafés or restaurants.  You can even choose from two different warm water swimming pools close by the campsite.

And who knows that you may run into the Oscar winner Hildur Gudnadottir in town during your easy walk and relaxation in your vacation.

RUNNING IN ICELAND There are many different possibilities to run in Iceland.  Does not matter if you are into street...

SWIMMING POOL FOR KIDS IN ICELAND

Some good ideas for swimming pools for children of all ages in Iceland In Iceland where there is abundant of...