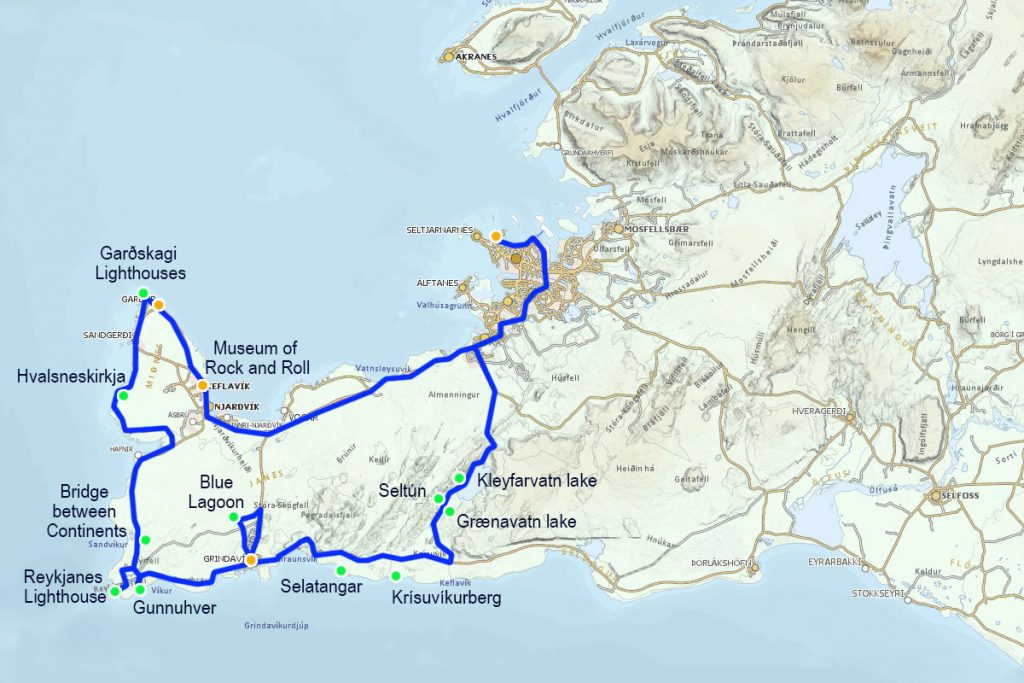 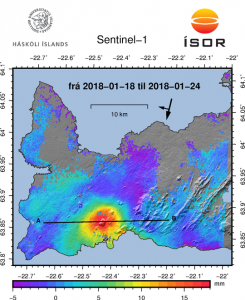 Inflation has been detected in the last few days. An earthquake swarm has been ongoing during the same period. A state of uncertainty has been declared. The aviation color code has been raised to yellow for Reykjanes.

An inflation has been detected since January 21st and is centred just west of Mt. Thorbjorn on Reykjanes peninsula. The inflation is unusually rapid, around 3-4 mm per day and has accumulated to 2 cm to date. It has been detected both on continuous GPS stations and in InSAR images. The inflation is most likely a sign of magma accumulation at a depth of just a few km. If magma accumulation is causing the inflation, the accumulation is very small, with the first volume estimate is around 1 million cubic meters (0,001 km3).   This is the conclusion of a meeting held with the Scientific council of the Civil Protection at the IMO this morning.

Accurate measurements of crustal deformation on Reykjanes peninsula span approx. three decades. During this period no comparable signal has been measured. This is unusual for this period. An earthquake swarm has been ongoing, since January 21st, alongside the deformation signal just east of the inflation centre (northeast of Grindavík).  The largest earthquakes occurred on January 22nd and were of M3,7 and 3,6. They were felt widely on the Reykjanes peninsula and all the way to Borgarnes region. The earthquake swarm is currently in decline. Swarms like this are common and not unusual by itself in the area. The fact that an inflation is occurring alongside the earthquake swarm is a cause for concern and closer monitoring.

The inflation is centred within an active volcanic zone

The inflation is occurring on plate boundaries and within the volcanic system of Svartsengi which is either considered a separate system or part of the Reykjanes volcanic system. The last known eruption was during Reykjanes fires, which occurred between 1210-1240 AD. Within that period a several eruptions occurred within that system, thereof there were three eruptions in Svartsengi system. The eruptions were effusive (non-explosive) fissure eruptions erupting on 1-10 km long fissures. No explosive eruptions are known from this system. The largest eruption in the swarm, from 13th century, formed Arnarseturshraun lava (estimated 0,3 km3 and 20 km2). Historically, the duration of these eruptions spans from a few days up to several weeks. Seismic activity is very common in this area and is linked to the plate boundaries, geothermal activity and possible magma intrusions. The largest earthquakes measured in this area are about M5.5.

The activity has only been ongoing for a few days and it is uncertain if it will escalate to more serious activity. Based on current information, the following scenarios are considered possible, without stating which is most likely or within what timeframe.

1. If the inflation is due to magma accumulation:

•      Magma accumulation continues for some time without further activity.

•      Magma accumulation will lead to a magma intrusion.

2. If the inflation is not caused by magma accumulation:

•      The inflation might be linked to tectonic activity and lead to larger earthquakes (up to M6.0).

The National Commissioner of the Icelandic Police in cooperation with the Police Commisioner on Reykjanes has declared a state of uncertainty. A public community meeting will be held in Grindavík tomorrow, Monday January 27th at 4pm. There the situation will be discussed with the Department of Civil Protection, scientists and first responders. The 24/7 monitoring of the area has been increased at IMO.

Reykjanes Peninsula is the onshore continuation of the Mid-Atlantic Ridge. The rift valley that lies at the crest of the ridge extends in a northeast direction along the peninsula, from Reykjanes, in the southwest, to Vogar and the Keflavík (Keflavik) airport road, in the northeast. Here the rift ends. Another rift starts about 10 km to the east and is parallel to the first. This one passes by Reykjavik on its eastern edge. This stepping pattern, called en echelon by geologists, repeats twice more. The fourth rift is quite long and eventually passes through Þingvellir (Thingvellir) to the northeast. The en echelon rifts are caused by the plate boundary, which runs along the peninsula, being not quite perpendicular to the spreading direction in this area. In terms of energy, it is easier for the crust to break in tension, rather than shear, and it does so whenever possible. With continued spreading, the offset ends of the rifts will eventually become connected by transform faults. A transform fault may be forming further to the east near Selfoss, where an east-west belt of earthquakes is causing some concern. 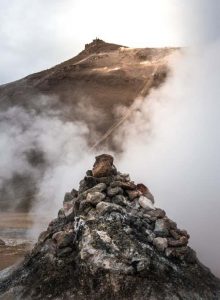 Brennisteinsfjöll (Brennisteinsfjoll – “Brimstone Mountains”) is a minor ridge with small shield volcanoes and crater rows in the Reykjanes peninsula. It is located about 20 km south of Iceland’s capital Reykjavik, east of Kleifarvatn Lake. An eruption at Brennisteinsfjoll in 1000 AD was dated due to its occurrence at the time of a meeting of Althingi, Icelandic outdoor parliament, at Thingvellir.  The most recent eruption in Brennisteinsfjoll was in the 14th century.

The rocks seen along the Keflavík – Reykjavík road are basalt lava flows, all less than 700,000 years old. These rocks are somewhat similar to those found in Hawaii. Near the village of Vogar lie some of the youngest rocks in the area. Little or no soil or vegetation cover them. Geothermal wells have been drilled into the underlying hot rock and steam is extracted to heat the Icelanders’ homes.

Because Iceland is the sub-aerial extension of the Mid-Atlantic Ridge, it is one of the world’s most active sites for basaltic fissure eruptions. For this reason, fissure eruptions are also known as Icelandic eruptions.

The first and only Icelander to win the Oscar The Icelander Hildur Guðnadóttir from the town of Hafnarfjörður made history...

SWIMMING POOL FOR KIDS IN ICELAND

Some good ideas for swimming pools for children of all ages in Iceland In Iceland where there is abundant of...

Iceland is a place where a mid-ocean ridge can be seen on land What's more, Iceland is probably the only...