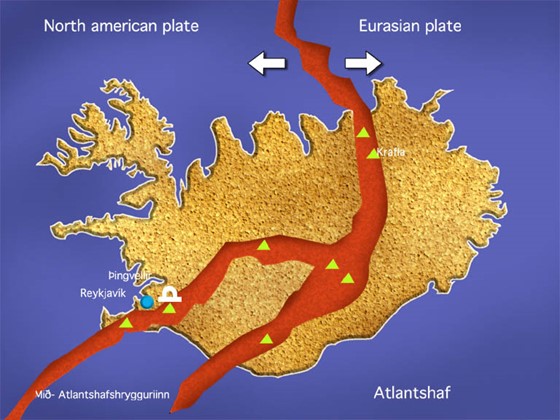 What’s more, Iceland is probably the only place in the world where the effects of two major tectonic plates drifting apart can easily be observed above sea level.

As well as its astounding beauty, the dramatic landscape at Þingvellir (Thingvellir) offers a chance to sight, on land and in shallow waters, the tectonic processes occurring along the submarine parts of a divergent ridge; processes that have been at play for millions of years.

What is a tectonic plate?

From a bird´s eye perspective, the Earth´s inner structure can be seen as consisting of several layers: the crust, the solid upper mantle, the viscous lower mantle, the liquid outer core and the solid inner core. The crust and the upper mantle together form the lithosphere (on average, 100 km thick); which is broken up into seven major and many minor “plates”, named tectonic plates. The lithosphere consists of continental crust and oceanic crust that surfaces in the ocean basins.

It is the interactions along the tectonic plate boundaries, where they converge, diverge, or slip past one another, that are thought to be the main cause of most of Earth´s seismic and volcanic activity. The scientific theory of plate tectonics (formulated in the 1960s), which incorporates the concepts of continental drift and seafloor spreading, describes these large scale tectonic movements.

The tectonic plates whose turbulent interactions formed Iceland, are the Eurasian tectonic plate and the North American tectonic plate. Spanning the Mid-Atlantic Ridge, Iceland emerged as a result of the divergent, spreading, boundary between these two plates and the activity of Iceland´s own hotspot or mantle plume. As the plates moved apart, excessive eruptions of lava constructed volcanoes and filled rift valleys. Subsequent movement rifted these later lava fields, causing long, linear valleys bounded by parallel faults. The divergence of the ridge started in the north about 150 million years ago and 90 million years ago in the south. These movements continue today, accompanied by earthquakes, reactivation of old volcanoes, and creation of new ones. Iceland is the largest island on the ridge because of the additional volcanism caused by the hot spot beneath the country, which moves slowly towards the northwest.

The tectonic plates move towards east and west, and both the North American and Eurasian systems move to the northwest across the hot spot. On top of hot spots there’s generally a 20-100% molten layer at the depth of 5-20 km, which supplies sufficient material for eruptions. Eruptions occur about every 5-10 years and primarily consist of basaltic lava and tephra. A few long-lived centres, such as the volcano Hekla, erupt more silicic magmas.

Based on the age of the basaltic rocks, Iceland can be divided into three zones. Tertiary flood basalts make up most of the northwest quadrant of the island. This stack of lava flows is at least 3,000 m thick. Quaternary flood basalts and hyaloclastites are exposed in the central, southwest and east parts of the island. The Quaternary rocks are cut by the neovolcanic zone, areas of active rifting that contain most of the active volcanoes. The rifts are topographic depression bordered by and containing many faults.. Fissure swarms make up most of the neovolcanic zone. The swarms are 5-10 km wide and 30-100 km long. The rift zones have opened about 30 m in the last 3, 000 to 5, 000 years.

The uniqueness of Iceland in geological terms is nicely expressed in the words of Our Amazing Planet writer: “On a recent sunny afternoon in Iceland, a group of scientists took in a view of geological grandeur that nearly everywhere else on Earth would require a deep diving submersible. They were standing in Thingvellir, a sweeping valley surrounded by majestic cliffs …” The writer also mentions “some legendary sight-seeing”.

Being at Thingvellir, one is always struck by awe, in the literal sense of the word; intensely aware of being in the presence of the primordial forces that continue to shape Iceland, and our planet, and at the same time profoundly touched by the solemn, stately, deceptively tranquil beauty of the surroundings. It’s an unforgettable experience.

When visiting Iceland, the trip from Keflavík (Keflavik) airport to Reykjavík (Reykjavík) takes you along the edge of the North American plate where it meets the Eurasian plate. A drive to nearby Thingvellir valley, which is also the site of the world’s first parliament, reveals an older part of the rift system, where you can see both sides of the plates’ boundary in one breath-taking panorama. A voyage or flight to the island of Heimaey gives you a glimpse of new land forming and of the hazards of living in the path of a propagating rift.

The first and only Icelander to win the Oscar The Icelander Hildur Guðnadóttir from the town of Hafnarfjörður made history...

RUNNING IN ICELAND There are many different possibilities to run in Iceland.  Does not matter if you are into street...